Module AB-Qi for 4 tubes, PP & PPP amps, with a 6.3VAC isolation transformer for use in amps where the 6.3VAC filament supply is referenced to ground. Also requires bias supply from the amps circuit. 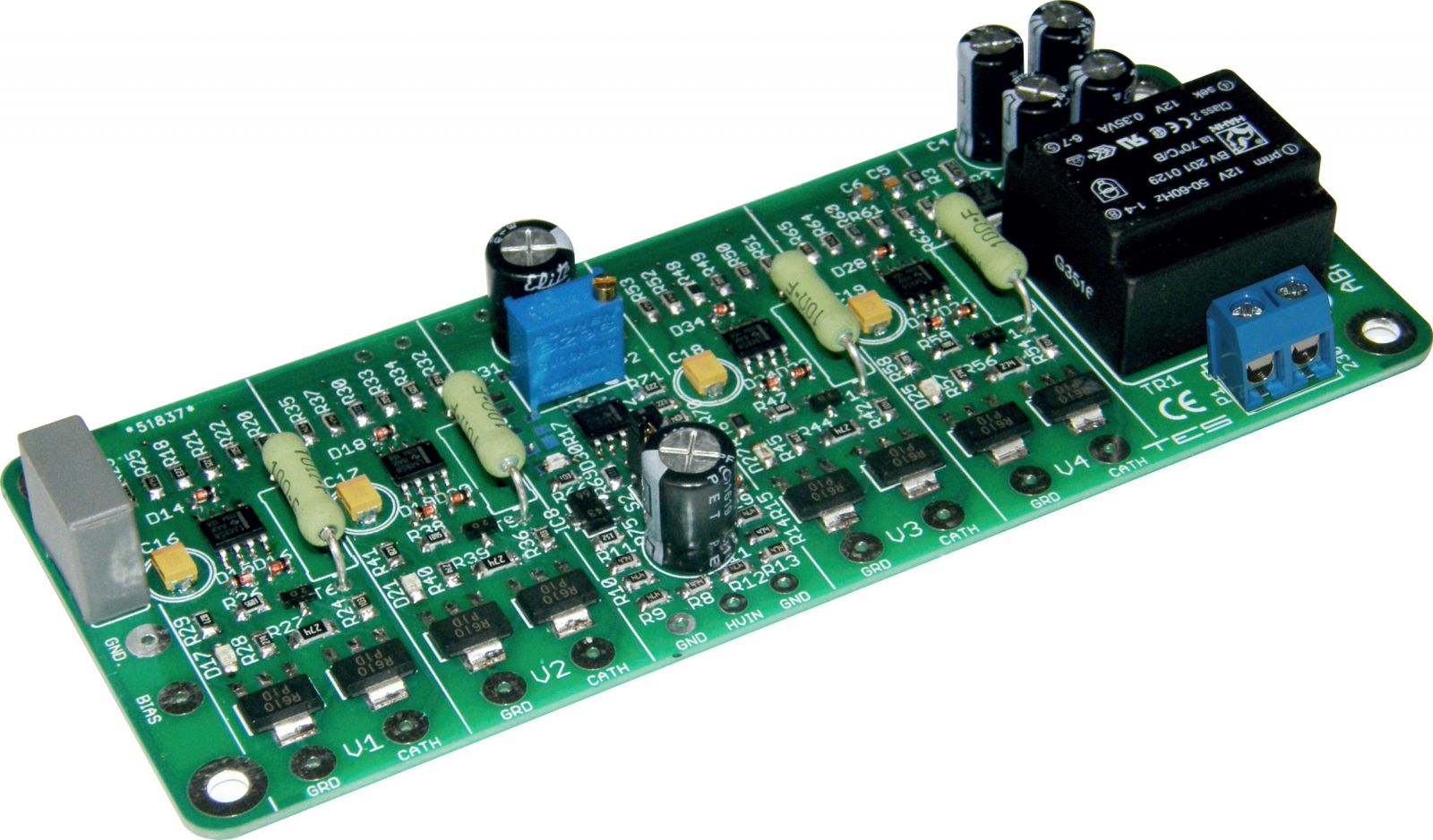 Autobias control - Modules adaptive bias control
The model AB-Qi auto bias module is designed to optimize the bias for four triode or pentode output tubes in Push-Push (PP) or Parallel-Push-Pull (PPP) amplifiers that have their own negative bias supply circuit.
Suitable for class A, AB, or B tube amplifiers.
The AB-Qi dynamically controls the bias in four tubes.
The module automatically optimizes the bias settings and maintains a strict symmetry of currents through both tube branches in the output stage. It will also stop any DC current flowing through the output transformers, all with the minimum of current loading on the anode of a tube.
DC current saturates an output transformer which results in increased low frequency distortions.
The bias level is kept at the preset value irrespective of the input signal.
This module has an isolation transformer for the 6.3VAC supply, making it suitable to use in an amp where the 6.3VAC filament supply is referenced to ground!
- PCB dimensions are 125mm x 50mm x 15mm high / 5" x 2" x 0.6" high
- isolated 6.3VAC for use with ground referenced 6.3VAC filament supply
- negative DC bias supply between -70V to -120V
INSTALLATION AND USER MANUAL FOR THE AB-Qi MODULE

This module has been designed to maintain a constant bias voltage through all power output tubes for your tube stereo power amp.

The bias is kept at a constant level on the output tubes, irrespective of the signal level.

The advantage of using the AB-Qi module is that it will extend output tube life, in a lot of cases it will also improve the sound and last but not least, you will never have to worry about adjusting the bias again.

The AB-Qi module has four blue LED’s, one for each output tube, which when lit, indicate that bias is at the correct level and that all is good with each tube.

Should any of these blue LED’s go out or not go on after power up, means that here is an issue with that given output tube and that the tube in question needs to be immediately replaced.

When the amp is powered up, at first a red LED will be on, indicating that there is power to the AB-Qi module. The red LED will go out after about 20s.

After a further delay of between 40-50s, each of the blue LED’s should come on indicating that the bias is now set and stable for each output tube. The amp is now ready to use.

The AB-Qi is suitable for class A, AB and C tube amplifies.

Before the AB-Qi module can be wired up, you need to preset its bias voltage.

This bias level is set using the blue colored trimmer on the AB-Qi module.

We strongly recommend that you preset the AB-Qi module before you proceed with installing it into your tube amp!

The AB-Qi has an isolation transformer for the 6.3VAC supply, so simply connect your amps 6.3VAC filament supply to the two terminals under the transformer.

Although in the below diagram it shows 230VAC, DO NOT connect mains supply there, ONLY the 6.3VAC filament supply!

Set your meter to read DC and to the lowest scale, say 1V, 2V or 5V. Put the black meter lead on any GND pad on the AB-Qi module and put the red meter lead on the pad next to electrolytic capacitor, see below. Now adjust the blue trimmer until the desired bias level is achieved.

That’s it, you just set the AB-Qi module to the desired bias operating level. 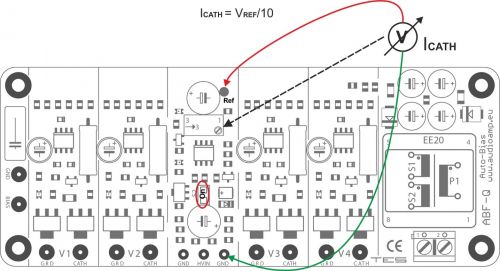 Unplug the power cord, wait for half a minute or so and disconnect the wires from the mains terminals on the AB-Qi module.

DO NOT EVER readjust the trimmer once the AB-Qi module is installed and wired up. The whole idea is to set in ONCE and forget!

Installing and wiring the AB-Qi module into your tube amp:

Please refer to the drawing below, which shows a typical tube amps connection for your AB-Qi module.

The HiV input is only connected if the amplifier is equipped with a delayed  connection anode voltage and connection with a time of more than 20 seconds.
In this case the jumper S2 must be disconnected (remove jumper see fig.) ! 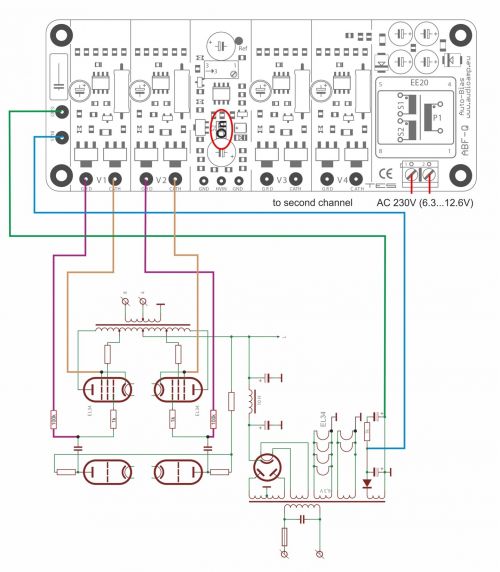 Use this diagram as a reference to the wiring of the AB-Qi module into your amp. Only one channel is shown, the other channel is identical.

This now pretty much completes the wiring of the AB-Qi module into your tube amp.

Double check all the wiring steps again, even triple check them J

Once you are confident that all your wiring is correct and as per the above steps, it is time to test your AB-Qi module installation.

Plug in all tubes, that is the driver tubes, power tubes and the tube rectifier. In order to see the blue LED’s on the AB-Qi module, place your amp on its side.

Maybe stick a piece of styrofoam under one of the output transformers to cradle the amp chassis so that the tubes do not touch the bench top.

Connect an 8 or 4 OHM dummy load or your speaker.

Power up your amp. The red LED on the AB-Qi module should come on straight away and will go out after about 20s.

After an additional 40 to 50s, each of the blue LED’s on the AB-Qi module should start to come on, which indicates that each output tube has reached the preset bias level and all is good. Excellent!

You can measure the actual bias voltage on each output tube with a meter just to double check.

Set your volt meter to the 1V, 2V or 5V scale in DC volts. Put the red meter lead on the cathode pin of the tube socket and place the black meter to the chassis star ground tag. The meter should read close to your preset bias voltage. This reading might be a little higher to start with and will get close to or exactly to the preset bias voltage as the output tubes warm up.

Do this measurement for each output tube.

Leave the amp running for about 10 minutes, all four of the blue LED’s should remain lit.

Power down the amp and let everything cool down a bit. Remove dummy load, if that’s what you used, or disconnect your speaker.

Re assemble your amp and place it in its spot.

Power up your amp and after about 60s or so, the amp is ready!

If things do not work as they are supposed to:

If none of the blue LED’s come on after the 40-50s soft start delay, power the amp back down. Check all your wiring from the AB-Qi module to your amp.

If say only three or two of the blue LED’s come on after the soft start delay, power the amp back down and check the wiring to that particular tube for which the blue LED did not go on for. Also check to make sure that the pins in that tube socket are nice and tight and that the tube fits into the socket not at all loose. Also check the pins in the tube socket of any oxidization, if they are dirty, perhaps use Deoxit or similar to clean the pins!

Do check that the pins in each tube socket are tight and that each tube does not fit loosely in the socket.

Do check that the pins in each tube socket are clean of oxidization, use Deoxit or similar if they are not clean.

Good fitting and clean pins in tube sockets make ALL the difference!!

Don’t do a lot of tube rolling! This is a sure way to loosen up the pins in your sockets! If you cannot help yourself and you must do tube rolling, check the tightness of the pins each time you swap tubes! 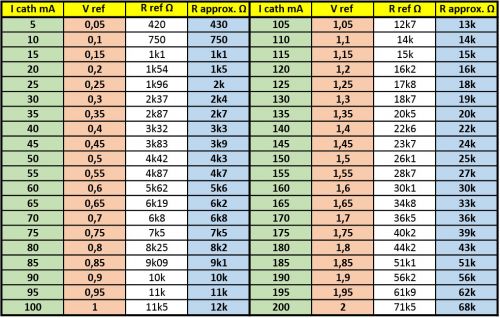 Goods of the same category - Module AB-Qi for 4 tubes, PP & PPP amps, with a 6.3VAC isolation transformer for use in amps where the 6.3VAC filament supply is referenced to ground. Also requires bias supply from the amps circuit.

Module AB-Oi for 8 tubes, PP & PPP amps, with a 6.3VAC isolation transformer for use in amps where the 6.3VAC filament supply is referenced to ground. Also requires bias supply from the amps circuit.

Module AB-Q for 4 tubes, PP & PPP & Single Ended amps, requires 6.3VAC & bias supply from the amps circuit. Not suitable where the 6.3VAC filament supply is referenced to ground, use the ABF-Q below.

Module AB-Di for 2 tubes, PP & PPP amps, with a 6.3VAC isolation transformer for use in amps where the 6.3VAC filament supply is referenced to ground. Also requires bias supply from the amps circuit.

Module AB-D for 2 tubes, PP & PPP & Single Ended amps, requires 6.3VAC & bias supply from the amps circuit. Not suitable where the 6.3VAC filament supply is referenced to ground, use the ABF-Q below.

Automatic opimize bias control AB-D The model AB-D auto bias module is designed to optimize the bias for two triode or pentode output tubes in Push-Push (PP) amplifiers that have their own negative bias supply circuit.    Suitable for class A, AB, ...